JMXTERM project has recently release the second version 0.2, which is much more reliable and better documented than the previous version 0.1. Several serious bugs including white space in MBean name and user/password based authentication were resolved in version 0.2. Besides, version 0.2 adds the feature of listing local running Java process even if they aren't launched with jmxremote argument.

Dark Knight, the #1 movie in IMDB

This movie tells that,
Dark Knight is unique and unconventional. The #1 position in IMDB may turns out to be too overwhelming in the future, but it's definitely easily the best movie of year, best superhero movie and a movie should be appreciated by Oscar academy. 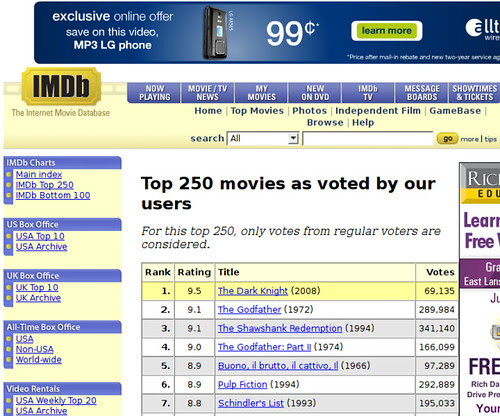 Reflection invocation is a little bit more expensive comparing to the direct call, but it wasn't very slow and it's not slow at all now in JDK 6. It is looking up by name that takes long time.

Link: What are the performance costs involved in Java reflection? E.g., looking up a method by name and then invoking it.
Posted by Jiaqi Guo at 7:52 AM No comments:

Email ThisBlogThis!Share to TwitterShare to FacebookShare to Pinterest
Labels: java

Pictures in this album were all taken from Pier66 in Seattle, between dawn and pitch black night. Most of them were under long exposure (5~60 seconds). Some were taken with neutral density filter. For examples: